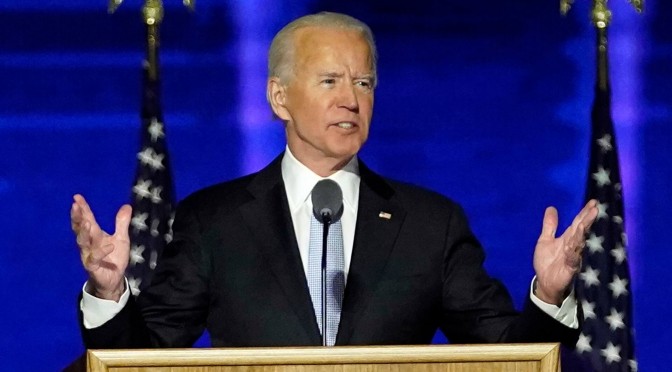 President Joe Biden used his first address before a global audience Saturday to declare that “America is back, the transatlantic alliance is back,” after four years of a Trump administration that flaunted its foreign policy through an “America First” lens.

Speaking to the annual Munich Security Conference virtually, Biden ticked through a daunting to-do list salvaging the Iran nuclear deal, meeting economic and security challenges posed by China and Russia and repairing the damage caused by the coronavirus pandemic, that he said would require close cooperation between the U.S. and its Western allies. Without mentioning Donald Trump’s name once in his speech, Biden mixed talk of a reinvigorated democratic alliance with a rebuke of his predecessor’s approach, a message warmly received by Western allies.

‘I know the past few years have strained and tested the transatlantic relationship,” Biden said. “The United States is determined to re-engage with Europe, to consult with you, to earn back our position of trusted leadership.”

The president also participated Friday in a virtual meeting of the Group of Seven industrialized nations, where leaders managed to work Biden’s campaign theme into their closing joint statement, vowing to “work together to beat COVID-19 and build back better.”

But while such happy talk conveyed the palpable sense of relief among allies at Biden’s full-throated commitment to mending frayed U.S.-Europe relations, plenty has changed over the past four years in ways creating new challenges.

China has cemented its place as a fierce economic competitor on the continent as the U.S. has reconsidered long-held national security and economic priorities embedded in the transatlantic alliance. Populism has grown through much of Europe. And other Western countries have, at moments, sought to fill the vacuum left as America stepped back from the world stage. German Chancellor Angela Merkel noted that some differences between the U.S. and Europe remain “complicated.” Europe sees China’s economic ambitions as less of an existential threat than the US does and has its own strategic and economic concerns that are not always in sync with Biden on Russia as well.

Still, Merkel, who had a strained relationship with Trump, didn’t hide her preference for an American foreign policy informed by Biden’s world view.