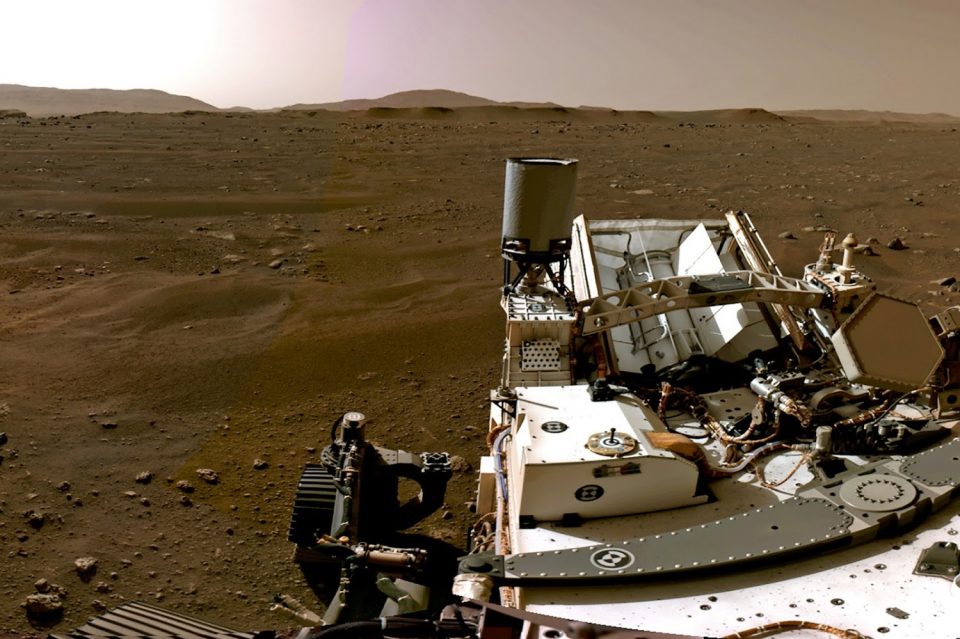 NASA on Monday released the first high-quality video of a spacecraft landing on Mars, a three-minute trailer showing the enormous orange and white parachute hurtling open and the red dust kicking up as rocket engines lowered the rover to the surface.
The footage was so good and the images so breathtaking that members of the rover team said they felt like they were riding along. “It gives me goosebumps every time I see it, just amazing,” said Dave Gruel, head of the entry and descent camera team.
The Perseverance rover landed last Thursday near an ancient river delta in Jezero Crater to search for signs of ancient microscopic life. After spending the weekend binge-watching the descent and landing video, the team at Jet Propulsion Laboratory in Pasadena, California, shared the video at a news conference. “These videos and these images are the stuff of our dreams,” said Al Chen, who was in charge of the landing team.
Six off-the-shelf color cameras were devoted to entry, descent, and landing, looking up and down from different perspectives. All but one camera worked. The lone microphone turned on for landing failed, but NASA got some snippets of sound after touchdown: the whirring of the rover’s systems and wind gusts.
Flight controllers were thrilled with the thousands of images beamed back and also with the remarkably good condition of NASA’s biggest and most capable rover yet. It will spend the next two years exploring the dry river delta and drilling into rocks that may hold evidence of life 3 billion to 4 billion years ago. The core samples will be set aside for return to Earth in a decade.

IIFL Finance to Raise up to Rs 1,000 Crore Through NCDs