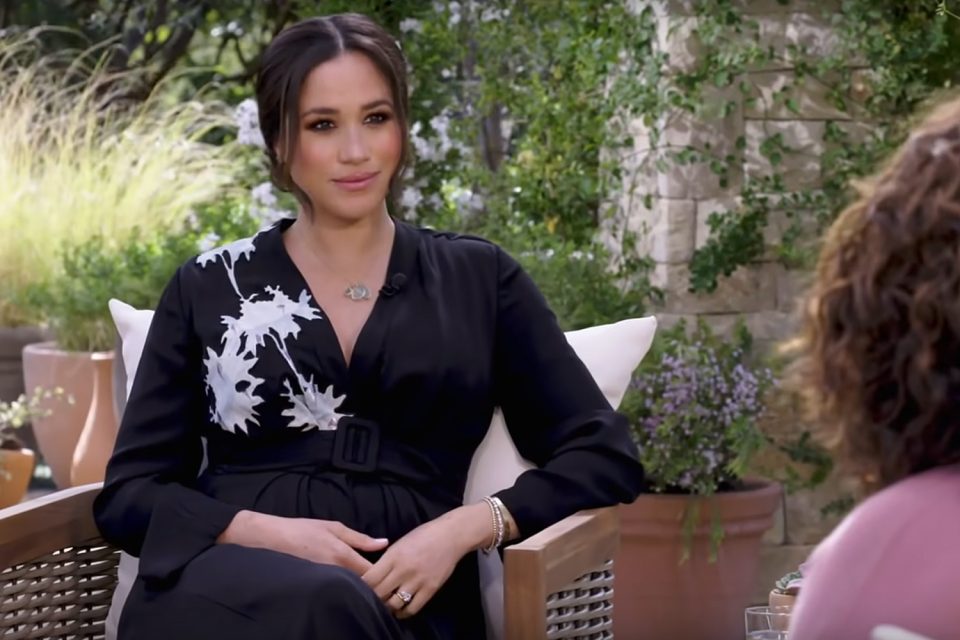 Recently in an interview, the Duchess of Sussex and American Actress, Meghan Markle accused the British Royal Family of racism. She said, “There were concerns about how dark her son Archie’s skin would be. They didn’t want him to be a prince or princess, not knowing what the gender would be, which would be different from protocol and that he wasn’t going to receive security,” Markle said in an interview with talk show host Oprah Winfrey. “In those months when I was pregnant, all around this same time, so we have in tandem the conversation of, ‘you won’t be given security, not gonna be given a title’ and also concerns and conversations about how dark his skin might be when he’s born.” These deeply personal and at times explosive revelations have made everyone want to watch it on TV or catch it somewhere on the internet. Social media is full of clips and teasers from the Harry-Meghan interview.

Buckingham Palace on Tuesday issued its first statement since Prince Harry and Meghan’s shocking interview with Oprah Winfrey. In it, Queen Elizabeth says, “The whole family is saddened to learn the full extent of how challenging the last few years have been for Harry and Meghan.”

“The issues raised, particularly that of race, are concerning,” the statement continued. “Whilst some recollections may vary, they are taken very seriously and will be addressed by the family privately. Harry, Meghan, and Archie will always be much-loved family members.”

After this interview people surged to Twitter and social media apps and expressed their views about the interview and discussions about racism were all over the internet. Let’s see how deep the problem is racism across the world.

Racism Across the World-

●   The United States- Just in the last year around May a big moment Black Lives Matter was at the peak when half a million people turned out in nearly 550 places across the United States. The civil unrest and protests began as part of international responses to the killing of George Floyd, a 46-year-old African-American man who was killed during an arrest after Derek Chauvin, a Minneapolis Police Department officer, knelt on Floyd’s neck for nearly eight minutes as three other officers looked on and prevented passers-by from intervening. An estimated 15 million to 26 million people participated in the 2020 Black Lives Matter protests in the United States, making it one of the largest movements in the country’s history.

●   Turkey- Speaking another language can establish a basis for racism. A young man in Turkey was stabbed to death very recently by three assailants on the grounds that he was singing a song in Kurdish. Kurds look very much like Turks, with similar lifestyles, religious beliefs, cuisine, and the like. Yet a different mother tongue can make fertile ground for the eruption of racism.

●   Australia– In 2009, the media of Australia, mostly in Melbourne, Sydney, and India publicized reports of crimes and robberies against Indians in Australia that were described as racially motivated.

Rallies were organized in Melbourne and Sydney, and intense media coverage of the perceived hate crimes commenced in India, which were mostly critical of Australian and Victorian Police. The Australian government initially called for calm as it began an investigation into the crimes.

●   India-  In 2017, India on Tuesday condemned an alleged racial attack on Nigerian students who were brutally beaten up in Greater Noida by mobs targeting African nationals blaming them for drug running following the death of a teen due to suspected drug overdose. Racism is a very big problem in India.

●   Europe- The European Union has little ground for finger-pointing when it comes to racism. EU countries are by no means free of discrimination and violence and calls for change are growing louder. Margaritis Schinas is the EU commissioner for “promoting the European way of life.” He feels that the struggle against racism falls under this purview.

“There is no doubt that Europe as a whole has been doing better than the United States in issues of race, also because we have better systems for social inclusion, protection, universal health care,” he said in a video chat arranged by the Greek nonprofit the Delphi Economic Forum. But he also acknowledged that the European Union has “some way still to go” toward equality and inclusion, with several issues yet to be addressed.

●   Singapore- In general, Singaporeans seem motivated to maintain the belief that Singapore is an egalitarian and meritocratic society. A recent survey of 2,000 Singaporeans provided some evidence for this proposition. For example, about half (53%) believe that racism is no longer an important problem currently. This finding could be interpreted as an indicator of covert racism. However, this belief might be justified in the absence of experimental evidence of racism in Singapore. The survey also suggested that Singaporeans are reluctant to discuss racial issues. For example, about two-thirds (64% to 66%) think that discussions about racial issues cause unnecessary tension.

People have been talking about racism for centuries. But, we have to admit that racism is a problem and that it’s a psycho-social problem. We can debate racial issues without fear of being publicly and permanently denounced as racist. Another solution is it’s accepted that all races are capable of both tolerance and bigotry. This solution can help us to know further information about racism. After all, we all are humans and humanity is something to pay attention to, rather caste, colour, creed, sex, religion, etc. have to show humanity.

Government of Ghana to Acquire 100% Stake in AirtelTigo