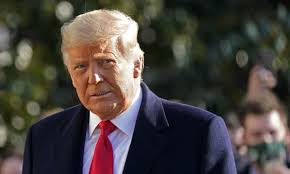 United States President Donald Trump was impeached by the House of Representatives for a historic second time Wednesday. Trump was charged with “incitement of insurrection”, a week after the riot at Capitol Hill.
With the Capitol secured by armed National Guard troops inside and out, the House voted 232-197 to impeach Trump. Ten Republicans joined Democrats in saying Trump needed to be held accountable and warned ominously of a “clear and present danger” if Congress should leave him unchecked before president-elect Joe Biden’s inauguration on January 20.
Trump’s fiery speech at a rally just before the January 6 riot is at the center of the impeachment charge against him. At least five people died in the violence that ensued as pro-Trump protestors breached barricades and advanced into the halls of the Capitol building, smashing windows and brawling with police officers.
Trump is the only US president to be impeached twice. Following the proceedings, Trump released a video unequivocally condemning last week’s violence but made no mention of his impeachment.
The next step is for the Senate to hold a trial and determine Trump’s guilt. A two-thirds majority will be required in the upper house to remove the president. However, the Senate is unlikely to meet before January 19, when it returns from recess. This means the trial will begin after Trump leaves office on January 20. Despite the timing, Democrats argue that to let Trump’s offenses go would set a dangerous precedent for future presidents.