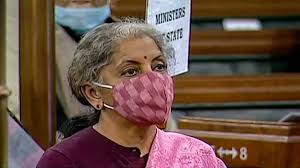 Finance Minister Nirmala Sitharaman tabled the Economic Survey 2020-21 in the Lok Sabha following which the house was adjourned. Today’s Survey holds significance as the economy begins to recover from the pandemic-hit year. According to the survey, real GDP growth for the next financial year (FY2021-22) is seen to be 11% while nominal GDP growth is seen at 15.4%. Growth recovery is likely to be led by government consumption, the survey mentioned adding that combined fiscal deficit to exceed target in FY21.
These numbers hold significance as all the Budget estimates to be presented on February 1 will be based on these growth numbers. Advance estimates put out by the government suggests the Indian economy may contract by 7.7% in the current financial year. Economists widely expect FM Sitharaman to continue with the spending plan so the fiscal deficit for the current fiscal is likely to be far wider than the 3% of gross domestic product mandated by law. The fiscal deficit for the year to March will probably be 7.25% of GDP against a planned 3.4%, according to a private survey.
During the presentation of the Union Budget 2020-21 last year, Nirmala Sitharaman had invoked the escape clause in the amended Fiscal Responsibility and Budget Management Act to increase the deficit target by 0.5% for FY20 and FY21 each. The roadmap presented at the time extended the target of reining in the deficit at 3% to FY24 while projecting the deficit at 3.3% and 3.1% in FY22 and FY23, respectively.