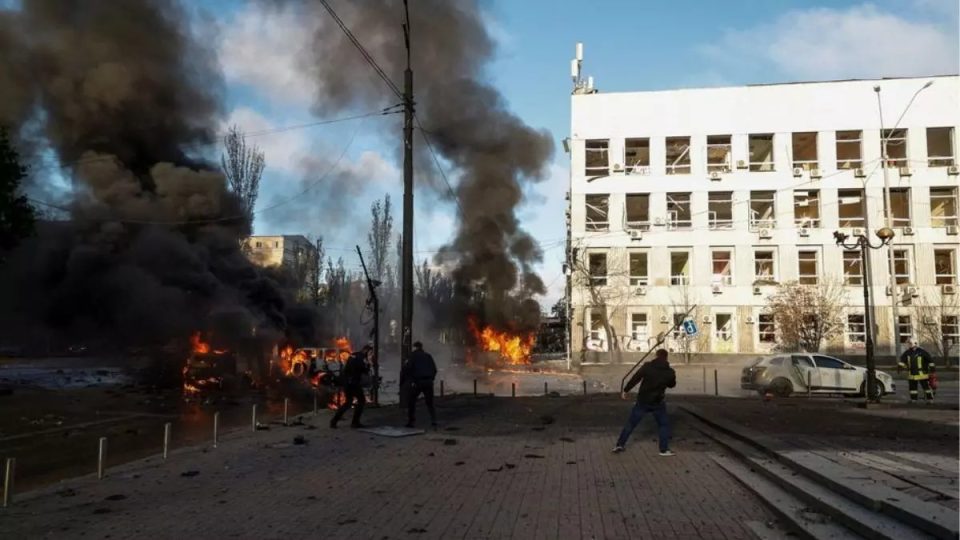 Russia fired more than 70 missiles at Ukraine on Friday in one of its biggest attacks since the start of the war.

Russia fired more than 70 missiles during the Friday morning rush hour in one of the most significant attacks on Ukraine since the war began, forcing an emergency blackout across the country, Ukrainian officials said.

They said two people were killed when an apartment building was hit in central Kryvyi Rih, and one was killed in shelling in Kherson in the south. Russian officials in occupied eastern Ukraine say 11 people have been killed in Ukrainian shelling.

Kyiv warned late on Thursday that Moscow planned a new all-out offensive early next year, about a year after the February 24 invasion of Ukraine that devastated swathes of Ukraine but barely brought it under Moscow’s control.

Since early October, Russia has fired missiles at Ukraine’s energy infrastructure almost weekly after several battlefield defeats. Still, Friday’s strike appeared to have done more damage than many others.

Moscow said the attacks aimed to weaken Ukraine’s military, which Kyiv called a war crime. The governor of the Dnipropetrovsk region said a missile hit an apartment building there.

Authorities said a third person died in the fire following the shelling in Kherson, which was also severely hit in eastern Kharkiv.

Russian forces have captured about a fifth of Ukraine’s southern and eastern territories. They are trying to expand in brutal fighting that has reportedly claimed many casualties, though neither side has released detailed reports of casualties for its own troops.

Eight people were killed and 23 wounded in the village of Lantrativka near the Russian border in the Russia-controlled Luhansk region of Ukraine, the Russian-appointed administrator of the area said on Friday.

The head of the Russian proxy People’s Militia in Luhansk said one civilian was killed by Ukrainian shelling in the town of Svatove, about 70 kilometres (40 miles) to the south.

A Kyiv military spokesman said Ukraine shot down 37 of 40 missiles fired at the Kyiv region.

Ukraine has managed to repair much of its electrical infrastructure to restore power and water, but each successive attack has made the task more difficult.

Kyrylo Tymoshenko, deputy director of the President’s Office, said that an emergency power outage is being implemented across the country.

Attacks were reported in areas including Poltava in central Ukraine and the Sumi region in the north, and Odesa on the Black Sea coast, with power cuts to several railway lines.

With peace talks looking hopeless, Ukraine’s defence minister predicted on Thursday that Russia would launch a new all-out offensive early next year, which could include a second attempt to take Kyiv after a failed attempt earlier this year.

In interviews with The Economist, Zelenskiy, Generals Valery Zarouzhniy, and Oleksandr Syrskiy said new attacks could happen in January.

They said the attack could have been launched from the East Donbas region, the south or neighbouring Belarus.

The Russian Defence Ministry released a video on Friday showing Russian and Belarusian troops conducting joint exercises in Belarus, using tanks and machine guns, as well as drones, and practising crossing a river.

Russia called its invasion a “special military operation” aimed at disarming and “denasifying” Ukraine. Thousands of lives were lost, cities were reduced to rubble, and millions were forced from their homes in what the West saw as an imperial land grab.

EU leaders agreed on Thursday to provide Ukraine with 18 billion euros in financing next year and impose a ninth set of sanctions on Moscow, including a ban on investment in its mining sector.

The US military said it would expand training for Ukrainian military personnel in Germany. The US Senate passed a bill to provide Ukraine with at least $800 million in additional security aid by 2023.